Bug squashing: This is not the messy kind of hitting annoying mosquitoes or sand flies and seeing their victim’s blood drain from them. No, here I am talking about the bugs that hide in software, are brought to light by keen users and then fixed by awesome developers.

This week is global bug squashing week for Koha, the open source integrated library management system. This is a “concerted effort to get bugs and patches moving along in the right direction” all over the world. Everybody is invited to help test bugs, add comments and if all is well sign off on them. 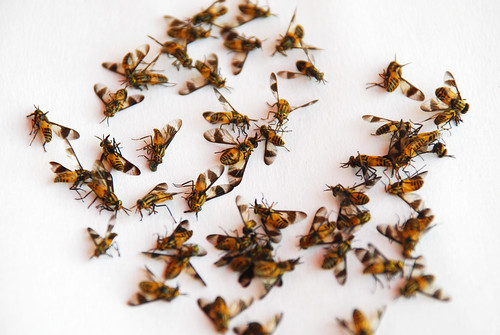 One of my colleagues, Chris Cormack, who is the Technical Lead of our Koha Team at Catalyst IT, announced this initiative on Monday at work and invited everyone to support the project.

I am not a developer, but I have already fixed a few bugs in Mahara – pretty much only language string-related – and as I like the Koha team and the software, I thought that maybe I could help as well as signing off on bugs does not necessarily require programming knowledge.

The Koha community makes it easy for people like me who cannot so quickly set up an instance of Koha on their own computer, configure it, import data etc. in that there are sandboxes that can be used for testing. What you need to do is test the faulty behavior on the latest version of Koha, the “master”. Once you have confirmed that there is a fault, you apply the patch and run your test(s) again. Hopefully, all works well and you can sign off on the patch.

Now, normally, applying a patch is something that requires some command line knowledge. However, thanks to the sandboxes, all you need to do is to provide the bug number, your email address and whether you want to start with a fresh database or not. Then all the command line magic is done for you and within a minute or so you have a fully functional Koha instance with the patch applied. Voilà. 🙂

On Monday, Chris showed me how to work with the sandbox, we found a bug that looked easy enough for me to test and tested it. As I do know a little bit about the version control system git, he showed me how to sign off “properly” with a patch of my own. At the end of 1 hour we had the patch submitted. A considerable amount of that hour was spent finding a suitable bug. In the evening, I attempted to test two more bugs and could sign off on one of them. The other one needed a bit more work.

Three of the five bugs that I tested are already merged and thus could be completely squashed. That’s pretty cool. I did require some more help from Chris because as I am not so familiar with the vast amount of system preferences you can switch on / off in Koha, I needed some prodding to look in the right direction so that I could actually test the faulty behavior correctly. It was great to get the help from him at all hours also on the community IRC channel. And it was nice to chat to other Koha developers on IRC, get updates of the weather around the world and so on. The community is very friendly and supportive.

Now if you want to participate, there are still 61 bugs that need sign off (maybe fewer when you see the list) and every contribution counts as the users make the open source community and improve the software.

On a related note: Yesterday, the Mahara team released the Mahara 1.5 Release Candidate 1. We invite everyone to test the software and give us feedback if you find a bug that should be fixed before the stable release is produced.

One thought on “Squashing bugs”