Mahara 1.4 was released a little over 1 month ago. And now our Mahara 1.4 Release Crew mugs arrived in New Zealand. Contributors in the UK have already received them earlier, but ours took a bit longer to make the long journey from the CafePress workshop.

These mugs are a limited edition and are only presented to contributors to the open source ePortfolio system Mahara who worked on version 1.4.

I love the little Mahara guys that one of our designers at Catalyst IT created for the various jobs in the production of the software. And the construction site as theme is just perfect. 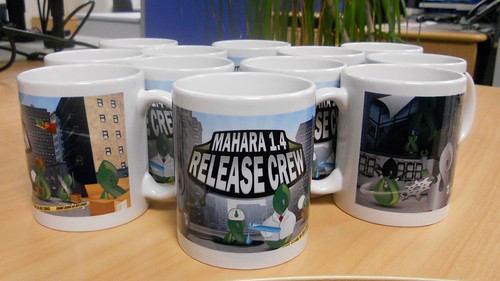