y vacation this year is already a few weeks ago, but only thanks to today’s holiday I can reminisce a little bit. This was my first true summer vacation in a very long time. I was on vacation near Toulouse, France, from July 15 to July 28. In the past years while working in Munich, I was lucky to be able to go on vacation in the off-season as I did not have to stick to the university semester schedule to much as I have to now. Thus, I explored Maharashtra and the western Himalajan region (India) in the heat of April / May in 2007 and 2005, Gozo (Malta) over Christmas and New Year’s in 2005-06, the Landes (region near Bordeaux in France) in April 2004, and Dingle Peninsula and Dublin (Ireland) in September 2003. However, this year’s vacation couldn’t come at a better time: right after finishing grading student productions and before all our student assistants started to work at the beginning of August. 😉

As you can see from the following screenshots, I had no activity online whatsoever between July 15 and 28 (OK, Friendfeed and Swurl do not track everything, but you get the gist).

Screenshot from my Swurl timeline.

However, Swurl “messed up” my nice offline time view from above in the timeline after I uploaded my vacation pictures to flickr. You can see it as a nice feature that Swurl does not place the pictures on the day of the upload (as Friendfeed does), but on the day the pictures were actually taken. 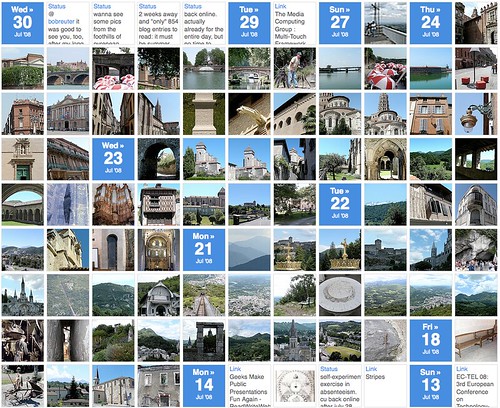 Screenshot of my Swurl timeline after I uploaded my photos to flickr.